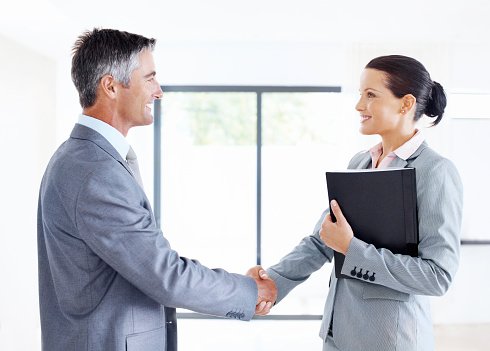 Ask anyone if they’ve ever had a bad handshake and you’ll most likely get a laugh and a vivid description.

It’s surprising how long we remember a bad one. Yet since we shake hands so many times in the normal business week, why do so many people shake hands badly?

According to a poll taken by Chevrolet Europe, more than 70 percent of people said they lacked confidence when it came to shaking hands. Chevrolet Europe even went so far as to commission Professor Geoffrey Beattie, head of Psychological Sciences  at the University of Manchester to create a formula for the “perfect handshake” in preparation for a handshake training guide they were developing. The study looked at eye contact, verbal greeting, Duchenne smile (smiling with eyes and mouth), completeness of grip, dryness of hand, strength, hand position, vigor, temperature of hands, texture of hands, control and duration of handshake.

Regardless of gender, you must still try to give a good handshake. In another study held by St. John’s psychologist William Chaplin, findings showed that “women who had firm handshakes tended to be evaluated as positively as men are.”

You have one shot at a first impression, so don’t ruin it up with one of these bad handshakes.

This handshake gives the impression that you’re shy, uninterested or lack self-confidence. Apply moderate pressure when shaking someone’s hand. When in doubt, try to mirror the other person’s grip.

The single most efficient way to make a very bad first impression is offering a cold, wet handshake. Always hold your beverage in your left hand and keep your right hand free for handshaking, especially during networking events.

This painful handshake can be an instant turn off. Crushing someone’s fingers or twisting your wrist so that your hand is on top is a sign of dominance. Your grip should be no harder than what you would use to turn a door handle.

There’s no need to grab someone’s hand and repeatedly pump it up and down. Send your hand in for the shake, pump one or two times, hold for a second, then release.

If you’ve ever shaken hands with someone who’s looking around the room for their next introduction, you’ve experienced the look away shake. Never let your eyes wander, no matter how tempting the distraction. Make the all-in connection between eyes and hands.

If you’re going to shake, then shake. Offering just your fingertips is like baking a cake halfway. It offers the same ingredients, but it’s much less satisfying.

If you linger while holding on to someone’s hand and add periodic squeezes, it can be wholly uncomfortable—on many levels. A proper handshake only lasts a couple of seconds.

This is when two or more people make a fist and bump each other with their knuckles as a way of saying hello. A study by the American Journal of Infection Control shows that handshakes transmit about 10 times more bacteria than fist bumps, but the fist bump will never take the place of a nice firm handshake that is the symbol of good manners and social confidence.

It’s vitally important to make a good first impression, and the handshake you offer is something you can control. Use it as your initial opportunity to connect, make it sincere, and you’ll be off on the right foot.

In honour of International Hand Shake Day on June 27, here is a reprint from Entrepreneur Magazine written by my teacher, Jacqueline Whitmore of Palm Beach School of Protocol Florida USA