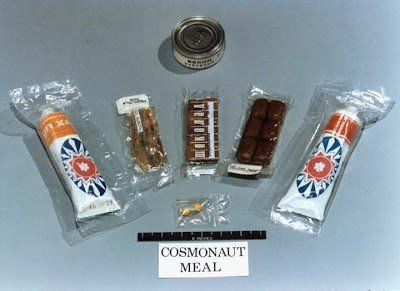 Dining on the moon and in spacecraft come with their own challenges. Their is no gravity so people and objects float up in the air. Astronauts live and work with no gravity in space and on spacecraft.

When the astronauts are dining on the moon and in spacedcraft, their meals are arranged on unique food trays that are made with velcro and magnets. Even knives and forks have to be held down to keep them from floating away.

Astronauts have to add water to dried food. If not enough water is put in the plastic pouch before opening it, the dried food will float around the space station and can get trapped in the air vents. That would be bad manners as all astronauts need air to breathe.

Maura Graber of the RSVP Institute of Etiquette interviewed Captain Alan Bean the fourth man to walk on the moon and he said “eat rather slowly and carefully to avoid having bits of food or gravy “shoot out like little bullets” and float around the spacecraft or onto the other astronauts.

If you are visiting with astronauts from another country and are on their spacecraft, astronaut sopitality says it is most polite that you eat the food from that contry, even if you don’t particularly like the taste.

Each astronaut has his or her own coloured dots on their food. Make sure your food has the food dot with your colour. It is not polite to steal another astronaut’s food.”

One time Captain Bean commented that his t-shirt was clean and all the other astronauts’ t-shirts were dirty. They responded, that yes, they were a mess, but that it was chilli and he was the one that was eating chilli.

Today astronauts are able to take some store bought foods with them which is a great improvement on how it used to be when space travel first started.