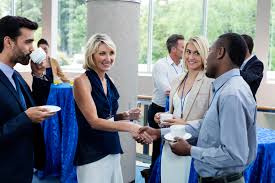 Networking Skills are very important so last week I gave a presentation to the Mosman Chamber of Commerce titled “Networking Skills”.  This is one of the subjects I teach in my Business Etiquette course.

A lot of people find networking a scarry thing to do but it is so important to the success of business today. Therefore everyone should learn how to network and how to network successfrully.  the rewards will be well worth it. Once you have been to a few networking functions, it will come naturally.

I think everyone who attended enjoyed the talk even though they did not like the idea of not eating and drinking too much at a networking function!!  They were hoping being able to eat and drink a lot was a good reason for attending but I told them that the main reason for attending was to network – this didn’t go down too well.

Several of the attendees came up to me afterwards and said that they didn’t realize business etiquette was about modern day business practice. They thought it was about things people did at the turn of the 20th century and didn’t apply to business today.

Other people came up to me and said that they network quite often and even though they already do some of the things I suggested, I gave them some very useful tips that they will be able to implement.  I have to say, this is really what my entire Business Etiquette course is about – giving people who already have good manners some extra tips that will put them ahead of everyone else.

The Business Etiquette course can either be taught on a one-on-one basis or for a group at a company.  The course takes a full day and covers many useful subjects such as Conversation Skills, Technology Etiquette, Office Etiquette, Dining Etiquette, Corporate Dressing and Meet and Greet.